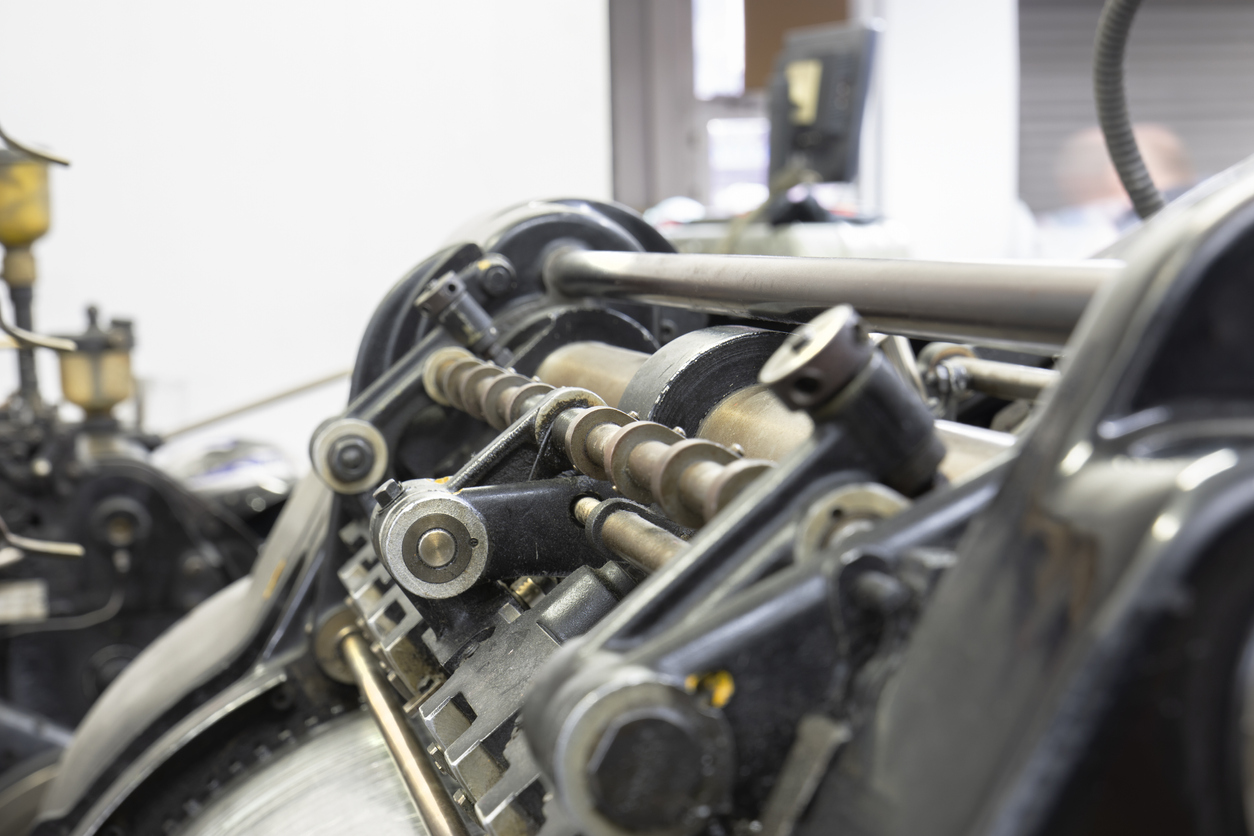 Developed and manufactured by the Heidelberger Druckmaschinen company, the Heidelberg Press is a “platen press” known for its speed, efficiency, and unique design that revolutionized the printing industry in the early 1900s.

How Does a Heidelberg Press Work?

A first of its kind, the Heidelberg printing press features a double-sided rotating arm that feeds the machine itself, removing the need for a person to manually feed paper to and from the machine. The Heidelberg Windmill first picks up a sheet of paper using its patented “propeller-gripper” vacuum built in the arm, then holds it in place while pressing it against the platen. When it’s finished, the Heidelberg printing press drops the printed paper into a tray while simultaneously feeding another blank sheet of paper.

In 1935 the fully automatic Heidelberg Automatic Cylinder press was introduced, this version of the Heidelberg printing press could produce up to 3,600 A2 prints per hour.

Who Invented the Heidelberg Press?

Nearly 60 years after the formation of Heidelberger Druckmaschinen, Karl Georg Ferdinand Gilke invented the rotating feeder arm, which lead to the Heidelberg printing press becoming known as the Heidelberg Windmill.

When Was the Heidelberg Press Invented?

Though introduced in 1914, Karl Georg Ferdinand Gilke actually invented the power feeding technology for the Heidelberg press in 1912.

What Types of Paper Can a Heidelberg Press Print On?

For the Heidelberg Press, the sizes of paper that can be used are fully dependent on which model of the printing press machine you’re using.

According to the original manual, the paper sizes available to the 10×15 model can handle are as follows:

For the Heidelberg 13×18 Windmill

Benefits of the Heidelberg Press

With over 150 years of working to create some of the precise and reliable printing press machines, using a Heidelberg press brings a unique quality and texture to your prints because of the imprinting process that is created by the printer physically pressing the paper into the platen, a staple of letterpresses.

When choosing to use a Heidelberg press over another letterpress, there are a few factors to take into account, but mainly the speed and quality of this press make it the perfect choice for large runs of small to medium-sized prints.

Despite the Heidelberg Windmill being introduced a little over 100 years ago, its German engineering and efficiency first craftsmanship make it an ecological printing press machine. With a GE electric motor, the ratio of how much it produces versus how much electricity it draws is negligible. Also, it should be noted that with the use of its automatic feeding and placing mechanism paired with its ink reservoir, it’s already running more efficiently than one-offs made manually. Finally, the Heidelberg press has a quick-clean mechanism that easily allows operators to collect any harmful chemicals and solvents to be disposed of discretionarily.

With a certificate for all new equipment being CO2 neutral and their company motto “Think economically, print ecologically,” Heidelberg has had an environmental protection policy since 1992

Though Heidelberg introduced offset printing into their line of products in 1962, the Heidelberg press continued to be a mainstay for the company’s base, being manufactured until 1984. As one of the only classic letterpress machines to still have parts easily available and serviceable, the Heidelberg Windmill has a robust community of print enthusiasts who aren’t afraid to buy models that are well over 60 years old due to their longevity.

Though initially created for letterpress printing, the Heidelberg press was still in wide use when lithography became the standard for personalized print runs, this is due to its flexibility to move beyond the capabilities of other letterpress machines and its ability to cut, crease, and foil. In 1958, they also added the “thin stock button” that allowed for extremely thin and flimsy paper to be run at a higher speed than before.

Heidelberg’s CtP technology is both higher quality than Computer to Film techniques that other brands use, but it is also more precise and removes the risk of the unavoidable losses that come from Computer to Film transfers due to dust, and bad copies, or other irreparable occurrences. With noticeable accuracy improvements, digital printing plates remove all of the variables caused by analog materials to create consistent quality across the board.

Regardless of if you choose to use a vintage Heidelberg press or their newer CtP or CPC offerings, Heidelberg is known for being a printing press machine manufacturer whose products have stood the test of time, while being faster than its competitors without sacrificing quality. With the use of their ongoing commitment to removing the possibility of errors in printing while keeping the human touch where it should be, a Heidelberg press is as reliable as it is refined.

Printing that stands the test of time

After 150 years of innovation, a Heidelberg press has stood the test of time and technology. Regardless of if you want the textured feel of Heidelberg Windmill, the depth, and detail of an offset printing press machine, or just speed and precision.

The Benefits of Print on Demand Services